Oddly, astrology seems to have started all over the known world at about the same time. The planets were all given basically the same influential characteristics in each civilization. Mercury, regardless of name, had the same influence in the Americas as it did in China or Babylonia.

The Dawn of Astrology 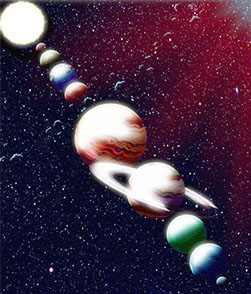 In the ancient world, humans lived mostly under an open sky. They were filled with wonder at the workings of the heavens—thunder, lightening, meteors, Sun, Moon, and stars. The bright lights in the night sky, the Sun, and the Moon held a different meaning to humans than they do now. People, in those long ago cultures, sensed something beyond the physical lights in the sky. They sensed something magical, something esoteric. They began to incorporate the stars in their mythology, and their religious and spiritual rites. In ancient Sumeria, the symbol for divinity was a star.

Looking up into the sky, the planets, Sun, Moon, and stars all look like they are moving across the sky and circling the earth. It’s no wonder that humans, for so long, believed the earth to be the center of the universe. From our perspective, it is. Ancient civilizations called the planets that they saw moving in front of the backdrop of stars, “Goats.” But it wasn’t long before the great civilizations, like the Babylonia and Sumeria, began naming the planets after their gods and goddesses.

To modern science, the relationship between a god or goddess and a planet was random, without any real meaning. But astrologers believe it was done purposefully, through sensitive priests and priestesses who claimed to experience the subtle energies emanating from the planets. Each god and goddess had dominion over a particular area of human life, and the gods and goddesses were paired with planets that matched their particular characteristic s and influence.

Oddly, astrology seems to have started all over the known world at about the same time. The planets were all given basically the same influential characteristics in each civilization. Mercury, regardless of name, had the same influence in the Americas as it did in China or Babylonia.

The form of astrology we use today can be traced back to Egypt around 4200 BC. And, until about 300 years ago, anatomy, astronomy, and astrology were the same science. Events, as well as health were foretold or analyzed according to the planets.

The Chaldeans were the first to create an astrological chart. They devised mathematical calculations of the planets in relation to a specific plane (ecliptic) in the heavens, and devised the ephemerid—a chart showing the movements of the planets. The earliest known ephemerid dates from the mid 7th century during the reign of Assyrian King Assurbanipal.

The Chaldeans mapped the twelve constellations within the ecliptic. It is these twelve, that the planets seem to move across. They noted that every two hours, the constellations would shift in the sky about 30° (1/12th of a complete circle). The Chaldeans also divided the heavens into twelve other segments, called “Houses.” Houses represent areas of life and are influenced according to which planets are passing through them. The angle between the planets would determine the nature of their influence.

Most astrology of the ancient civilizations was concerned with large-scale events such as war, natural disaster, and the rise and fall of kings. Personal astrology came much later. Around 25 BC, the Babylonian astrologer Berosus opened an astrology school in Greece. Over the next 400 years, the Greeks succeeded creating a complex and formal system of astrology which calculated horoscopes for individuals based on their moment of birth. Ptolemy, astronomer, mathematician, and geographer wrote the first astrological textbook around AD 150. This book established the astrological principles we still use today. This form of astrology spread to Rome and became so popular that Juvenal reported, around AD 100, that some people wouldn’t appear in public, dine, or bath without first consulting the stars.

When Ptolomy died in AD 180, astrology in Europe began to decline because the system of calculation was lost with his death. When Imperial Rome crumbled, astrology slid into a corrupt superstition. Then Christians gained power in Europe. They knew astrology only from this decadent state and denounced it as evil. Astrology would have been lost entirely if it had not been for the Arabs of North Africa and the Eastern Mediterranean. In the 8th century, the Caliph al-Mansur of Baghdad founded an important observatory and library. Damascus also held a major center for learning which included astrology.

The Arabs devised a system of astrology that would predict auspicious times for things in everyday life, such as journeys, weddings, celebrations, and such. This method was later incorporated into Western astrology. Albumasur (805-85) wrote, “Only by observing the great diversity of planetary motions can we comprehend the unnumbered varieties of change in this world.” His was one of the first Eastern books to be translated into Spanish and read by Europeans. This book sparked a revival of scientific astronomy and astrology in Europe.

In the Middle Ages, the Christian leaders in Europe were faced with the dilemma of what to do with astrology. Should they rethink it and declare astrology a legitimate science, or keep it forbidden as sorcery? John of Salisbury (1115-80) believed that astrology usurped God’s power. God was, after all, the creator of the stars. Could they steal the power of prophecy from Him? However St. Albertus Magnus (1200-80) believed that the planets did influence both the body and free will. St Thomas Aquinas (1225-74) wrote that astrology was an acceptable subject, worthy of intellectual study—as long as necromancy was excluded. He believed that astrology was in harmony with church doctrine.

Because of the change in attitude about astrology, studies flourished throughout Europe. The universities now taught astrology as a part of their curriculum. Astrology was again a respected occupation. Even Pope Sixtus IV was an accomplished astrology, and Pope Julius II consulted an astrologer to help him select a good day for his coronation.

Soon came a new astrology. Risking the wrath of the Church, in 1543, Nicolaus Copernicus published a book supporting the theory that the sun, not the earth, stood at the center of the solar system. This heliocentric theory was already accepted by many scholars and mathematicians. But the Church upheld Ptolemy’s Earth-centered theory because they believed it to be more in line with Biblical teachings. Later, Tycho Brahe, an astrologer and astronomer, who was adamantly opposed to Copernicanism , became a famous astrologer by predicting the death of the Sultan of Turkey.

The Church stubbornly clung to its belief that the heaven’s were fixed and unchanging, with the earth in the center of the solar system. But that all changed in 1572. A supernova occurred which was large enough for all to see in the middle of the day. Everyone, including Church officials, were witness to a spectacular change. This opened the door for scientists like Tycho Brahe.

Brahe spent his life trying to prove Copernicus wrong but could not. After he died, Kepler, an astrologer and staunch supporter of Copernicus, used Brahe’s records to prove a heliocentric solar system and to correct Copernicus’ mistakes. Kepler had discovered that the planets revolved around the sun in elliptical orbits, and that their speed is not constant.

One would think that this new view of the solar system would have disastrous repercussions on astrology, but not so. Whether the Sun or the Earth was the center of the solar system, we experience the universe as if it were all revolving around us. The planets, Sun, and Moon still appear to cross our sky. The constellations still appear to circle the earth. The influences remain the same , but now we are able to predict the motions of the celestial bodies with more accuracy.

Toward the end of the 17th century, there was a growing trend toward separation of science and religion. The Church still supported astrology. The scientific community was growing more dependent on mathematics and more skeptical of anything intuitive. When Isaac Newton published the Principia Mathematica in 1687, the end of astrology as a recognized material science finally came. It, again, declined into superstition and corruption, becoming mired in trivia and mystical exploitation. Astrology didn’t revive until the end of the 19th century when Madame Blavatsky, founder of the Theosophical Society, taught the validity of astrology in her writings. Then Alan Leo began writing seriously about astrology. His works are still used by astrologers as a base for modern astrology.

Astrology cannot yet be explained by materialistic science, but neither can some aspects of weather. The laws governing astrology are those not yet uncovered by modern science. The future of astrology, as a respected science, rests in the hands of qualified astrologers. Astrology, like astronomy is only as good as its interpreter.

Fortunately, a new wave of science is sweeping the earth. Science is revealing mysteries that may one day bring materialistic science and spiritual science together. That there are “unseen” and unknown forces at work in the universe is being experienced by quantum physicists and others every day. Eventually, we hope, there will be a time when the best of both worlds of science and astrology will again work together.